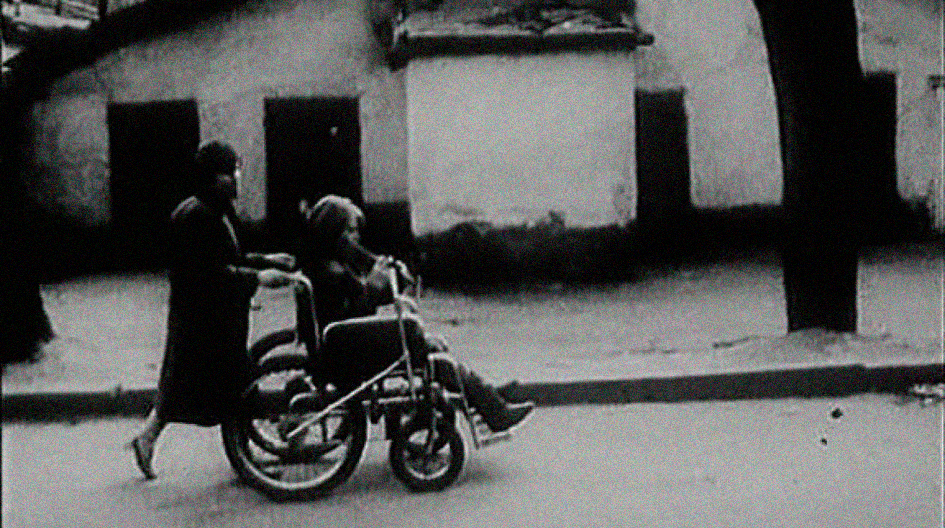 Artur Aristakisian finished Palms in 1994 at the VGIK, the famous Russian film school, after several years of work. An ode to beggars, the disinherited, the down and out, the excluded in the heart of a city of which their bodies provide the beat. This vast flowing poem in the streets of Chișinău, Moldavia, this letter addressed to an unborn son is a speech to the world, a mystical and visionary allegory like a “soul of resistance” for the world to use. A film which has reached almost mythical status today, which does not prevent Artur Aristakisian from sharing and transmitting his vision of film with young talented creators within a laboratory with which he has been entrusted at the Moscow School of New Cinema. Around him, bearing a highly marked cinematic singularity, Elena Gutkina, Genrikh Ignatov and Nadya Zakharova.

The desire to present Palms once again in Lussas, this time in the company of Aristakisian, was born in 2016 when we met the two co-directors of The Wolf and the Seven Kids, who were studying with Aristakisian. They mentioned regularly other films, rare films that indicated an attentive awareness of film history, in which Aristakisian’s influence was notable. Then they presented us Ogoni, the film by Nadya Zakharova, an incandescence.

Two years later, during a passing visit to Moscow, Elena and Genrikh organised a meeting with us and Artur Aristakisian. In his home, the main room is the one where films are projected. He showed us a sequence shot in 16mm by one of his students, a view of the face of a blind man, scarcely a few shots, an annunciation of things to come, and few words were needed to speak of it. If cinema must reveal an invisible reality of the world, Artur Aristakisian strives to show how this reality is traversed by alle- gories. The task of the filmmaker is to try to grasp them, to transform them all the while keeping their heart intact.

He says of Palms: “I filmed people I see in the street and that no-one pays attention to. I could have spent my entire life observing them.” For him, cinema is a form of photographic relationship to life. Cinema recounts life by seizing people captured in fragments of time. A film is a form of experimentation, of dialogue with the film itself, like a distinct and auto- nomous substance, nourished by this photographic reality. “The film is the main character of Palms. The beggars seem to me to be this language allowing to see the film itself, to see and to feel with one’s eyes. I didn’t think at that moment that a film would neces- sarily emerge. I just felt that I should film, film, and film again. I was interested in the people, their

actions, their faces, as a language – like a code, a code with which you could speak to people, but in a non-verbal language, in a visual language.” These last words apply precisely to the two films of former students that we have chosen to present.

Elena Gutkina and Genrikh Ignatov do not scrutinise, do not peer, they wait, on the side; the tension in their gaze and the attention they pay are papable. They compose a visual texture which marries the indistinctness of their narrative, the vibrant blur of a wet road and a dark forest, or that of a vernacular still life on the kitchen table. Aside from Valya’s body, these are the only landscapes that mark the setting of this story. There is certainly something undistin- guishable in their life, which nonetheless ties together Valya and her father, and that the two filmmakers manage to sketch out. Their film is a closed space, while Nadya Zakharova’s is a wandering movement from town to steppe. Visions and apparitions, flights and escapes: the young filmmaker with eyes keenly alert manages to exasperate reality, to stoke it to a point of incandescence where the feverishness of an invisible and yet so luminous desire appears, forming so many sparks of the living enveloped in a myriad of sounds.

Aristakisian said on the subject of Lionel Rogosin’s On the Bowery, which he has chosen to present: “On the Bowery, human souls perish. A rotten place where there is no love. The man who fell got his socks lifted, his pockets emptied. And it’s exactly there, down here, that the miracle takes place. The protagonist survives to the end of the film and catches the train of life. Before that, he witnesses a supernatural act taking place in a men’s toilet. Rogosin is a “great” foreigner. On the Bowery is a film made in Paradise.”